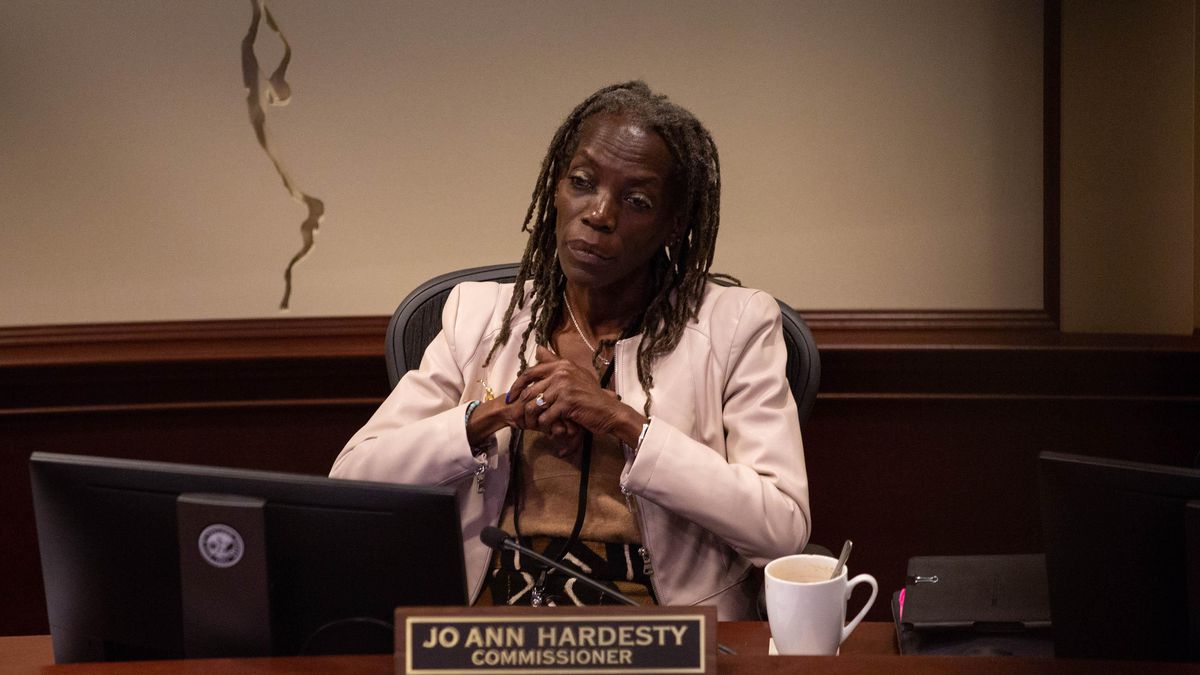 A months-long internal affairs investigation into a Portland Police Department leak found officers Brian Hunzeker, Kerri Ottoman and Ken Le to be responsible for disclosing false information implicating Commissioner Jo Ann Hardesty in a hit and run, according to an October ruling letter sent to Hardesty and obtained Thursday by OPB.

Despite months of speculation, the letter, which Hardesty and the city were unwilling to release, provides the first public confirmation of the facts behind the leak.

The letter is a summary of the findings of the internal affairs investigation into seven allegations against the officers involved. The investigation examined whether the leaks were racially motivated and whether it was in retaliation for Hardesty’s outspoken criticism of the police.

According to the letter, the investigation revealed that Hunzeker, who was president of the union representing the rank and file officers at the time, disclosed the false allegations to a member of the media and provided that person with a screenshot of a dispatch report indicating that Hardesty was involved in a traffic accident in March. The leaked information, which was published in the Oregonian / OregonLive, was incorrect. Ottoman disclosed the same information to Gabriel Johnson, the director of the Conservative Coalition to Save Portland PAC. The investigation also revealed that Le leaked the information to a friend in the Emergency Communications Office who worked as a dispatcher.

“Officer Hunzeker admitted to sharing information about an ongoing criminal investigation with a member of the media during a phone conversation he initiated, then later providing a screenshot of the CAD call. to the reporter, that he admitted to being in violation of that directive, “North said. Constituency Commander Kristina Jones wrote as part of the investigation.

Ottoman told investigators she shared the information with Johnson because she was confiding in a friend.

The investigation confirmed that Hunzeker’s actions were in retaliation to Hardesty who spoke negatively about the police office, but found none of the racially motivated leaks.

Although the investigation is complete, the recommended disciplinary action against the officers involved is not yet public.

Hardesty received a copy of the letter as a private citizen who had filed a complaint with the City of Portland. In October, she declined to disclose the letter through her personal lawyer, who told OPB he did not believe it was in his client’s best interests. The Portland city attorney also declined to release the letter, saying it was exempt from an application for public registration. The OPB appealed the decision and Multnomah County District Attorney Mike Schmidt agreed on Wednesday that posting the letter was in the public interest.

“This case has been on hold for 10 months, during which time it has come under scrutiny and speculation in most major local media,” Schmidt’s order said. “We conclude that the public interest requires the immediate disclosure of the summary factual information contained in the disposition letters.”

Hardesty filed a lawsuit against Hunzeker, Ottoman, the Portland Police Association and the City of Portland on December 13. Although she is already in possession of the letter released Thursday, the complaint provided little evidence to substantiate her claims against Hunzeker and the Ottoman.

His lawsuit seeks $ 3 million from the Portland Police Association and $ 1 million each from Hunzeker and the Ottoman. The lawsuit also demands $ 1 from the city of Portland and a statement that it violated Hardesty’s right to be free from “distinctions, discrimination or restrictions based on race.”

Hardesty’s lawsuit alleges officers showed up at her home at 1 a.m. and knocked loudly on her door. A tort lawsuit filed in August alleges the intention was to make a “criminal march” with Hardesty as a show of force against a vocal critic of the office.

“Even though the information provided was objectively unreasonable, highly suspect and possibly racially motivated, unknown employees, including, on the basis of information and belief, PPB agent Brian Hunkezer, wrongly disclosed the information. to other city employees and the press, ”the statement read. “The leaks were made in an attempt to discredit Ms Hardesty on the basis of her race and in retaliation for decades of opposition to racial discrimination by the PPB against her fellow citizens.”

The allegations stem from a 911 call in which a caller falsely identified Hardesty as the driver of a vehicle that ran over her at an intersection in southwest Portland. Hardesty was quickly exonerated, but not before the charge was leaked and reported in conservative media and in the Oregonian / OregonLive.

The office’s internal affairs division carried out a months-long investigation into the leak. The city also hired the OIR Group, a Los Angeles-based law enforcement company, to conduct an external investigation.

At the time of the leak, Hunzeker was the newly elected president of the Portland Police Association, the union representing rank and file officers. He took over as head of the union about two weeks before voters broadly approved a new police oversight board. The board, defended by Hardesty and fiercely opposed by the union, has pledged to be an independent group run by civilians with the power to discipline and fire officers.

The political fight for the new board has put a strain on an already strained relationship between the union and Hardesty, a longtime critic of the board who has argued for more stringent alternatives to accountability and maintaining accountability. order.

The leak also came amid contract negotiations with police unions, a push in Salem to pass legislation to ease the transition to the voter-approved supervisory board, and as city officials debated cuts. the budget of the police office.

Less than two weeks after the hit-and-run and the flight that followed, Hunzeker resigned as president of the police union, ending his five-month tenure unexpectedly and unexplainedly.

The union’s announcement only stated that Hunzeker had made “a serious and isolated error relating to the police bureau’s investigation into the alleged hit-and-run of Commissioner Hardesty.”

The union gave no details but said Hunzeker “held himself accountable by resigning his post as chairman of the PPA with immediate effect”.

The mysterious resignation has led to months of speculation. After briefly resuming his patrol duties, Hunzeker was put on paid administrative leave in June.

The details of Hunzeker’s leave and the investigation have been a closely guarded secret for the past 10 months, a common occurrence in police misconduct investigations. People familiar with police discipline and the demands of union contracts said secrecy is necessary to ensure that the investigation is not overturned by an arbitrator if the union decides to challenge the results.

The leak also sparked an investigation into two 911 dispatchers at the city’s Emergency Communications Office. The investigation found that dispatchers were not involved in the leak, but gossiped about the incident to colleagues in violation of office policies. Both dispatchers have been suspended. A third dispatcher received guidance for an unspecified minor violation.

Disciplining the president of the police union – who is a sworn officer but serves full time as the president of the union for the duration of his term – is rare and has proven difficult in the past due to what the director human resources department called it a “special relationship” in 2014.

At the time, then-Police Association president Daryl Turner was accused of intimidating an independent police review investigator and of filing complaints against the group for hamper their investigations.

City Auditor Mary Hull Caballero, who oversees the IPR, told the Oregonian / OregonLive that the behavior was intended to cool and hamper independent police investigations.

The allegations against Turner were ultimately not investigated due to his “special relationship” with the city.

The US Department of Justice disputed this ambiguity in its 2015 progress report on the settlement agreement.

“Rather than assuming that a ‘special relationship’ merits the absence of investigation, the City should build a solid factual record to determine whether any allegations have occurred,” the DOJ wrote in the annual report. “The City’s refusal to conduct a full investigation into the bullying allegations undermines public confidence in SCH and thus unfairly darkens the public’s perceptions of all officers.

If Hunzeker is ultimately disciplined, the ambiguous relationship between the president of the police union and the city could become sharper.