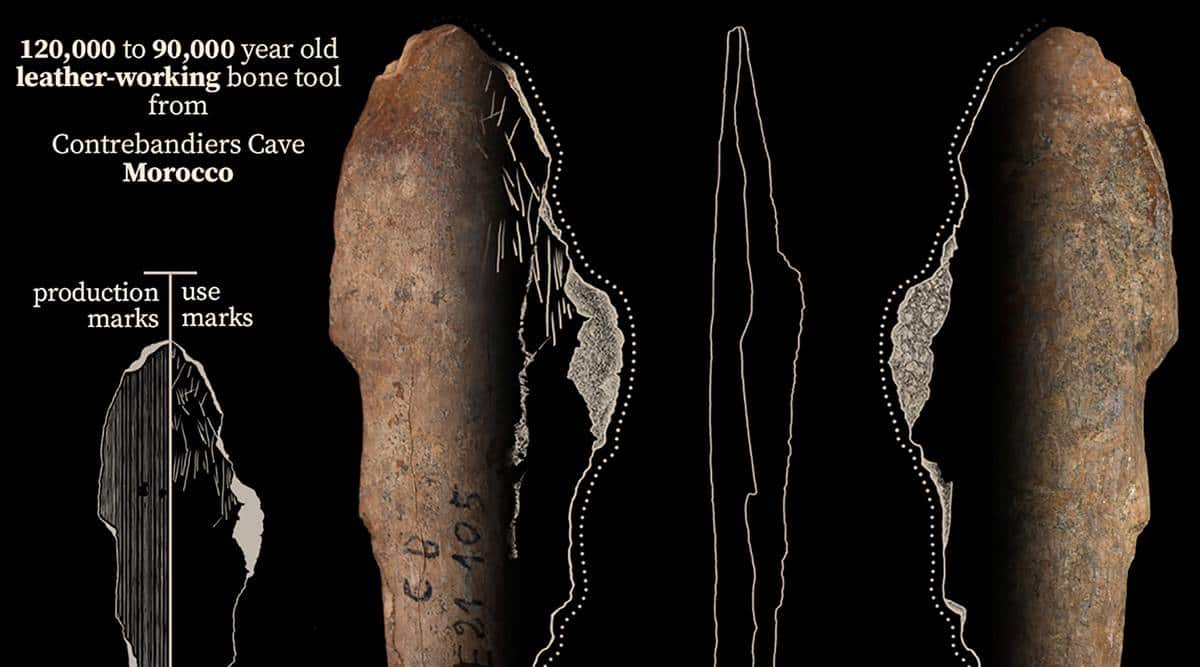 People may take for granted the need and existence of clothing, from shirts to pants to dresses, coats, skirts, socks, underwear, bow ties, top hats, etc. gowns, kilts and bikinis. But it all had to start somewhere.

Scientists said Thursday that artefacts discovered in a cave in Morocco dating back 120,000 years indicated that humans made specialized tools out of bones, skinned animals, and then used tools to turn those skins into fur and leather.

The objects from the Smugglers Cave, located about 800 feet (250 meters) from the Atlantic coast in the town of Temara, appear to be the oldest known evidence of clothing in archaeological records, they added.

Our species, Homo sapiens, first appeared over 300,000 years ago in Africa and then spread around the world. The advent of clothing was a milestone for humanity, reflecting cultural and cognitive evolution.

A new study by Hallett et al. to @iScience_CP presents ancient bone tools (120-90 ka) found in a Moroccan cave which were used to work leather and fur!

“We assume that clothing was integral to the expansion of our species into cold habitats,” said evolutionary archaeologist Emily Hallett of the Max Planck Institute for the Science of Human History in Germany, lead author of the study published in the journal iScience.

Scientists found 62 tools made from animal bones and also identified a pattern of cut marks on the bones of three small carnivore species – a fox, a jackal and a wildcat – indicating that they had been skinned for fur, and unprocessed for meat. The bones of antelopes and wild cattle suggest that the hides of these animals may have been used to make leather, while the meat was eaten.

“Clothing is a unique human innovation,” said evolutionary archaeologist and study co-author Eleanor Scerri, also of the Max Planck Institute for the Science of Human History. “We use clothes in a practical sense, to stay warm, for example, or to protect our skin. We also use clothing symbolically, to express something about who we are, and it also responds to a plethora of social conventions that tie in with our various global cultures, ”Scerri added.

Artefacts unearthed in a cave of
Morocco dating from 120,000 years ago indicates that
humans skinned animals and
then using tools to process these skins for fur and leather. (REUTERS)

The artefacts in the cave date from a period when evidence of personal adornments and other signs of human symbolic expression appear at various archaeological sites. Fur, leather, and other organic clothing is highly perishable over time, and no prehistoric clothing has been found in the cave.

The tools were made during a time when the cave was occupied by members of our species from around 120,000 to 90,000 years ago. The nature of the clothes they were able to make remains uncertain. Tools with a wide rounded end, called spatulate tools, were of particular interest.

“There are streaks on spatulate bone tools that are the result of use, and the shine at the ends of bone tools is the result of repeated use against the skin. Bone tools with this shape are still used today to prepare the skins because they do not puncture the skin, they are durable, and they are effective in removing connecting tissue without damaging the skin, ”Hallett said.

So far, some of the earliest evidence of Homo sapiens clothing has been bone needles dating from around 45,000 to 40,000 years ago from Siberia. Researchers suspect that our species had started making clothing thousands of years before the date of Moroccan artefacts, although archaeological evidence is lacking.

Genetic studies of clothing lice by other researchers suggest that clothing originated as possibly 170,000 years ago in Africa. It is also likely that the Neanderthals, a close human cousin who entered Eurasia before Homo sapiens, made clothes, given the cold regions they inhabited, the researchers said. They cited evidence of bone tools for leatherworking made by the Neanderthals around 50,000 years ago.