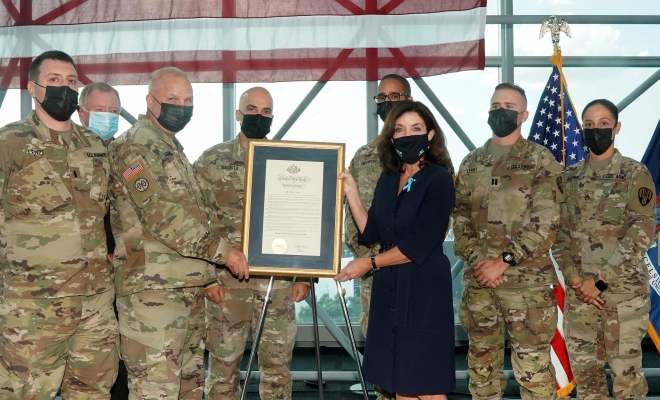 VIDEO of today’s talk is available on YouTube here and in TV quality (h.264, mp4) here.

A quick transcript of the governor’s remarks is available below:

Good afternoon. For everyone in this room, it has been a very emotionally draining day. The reminder, first of all, when you wake up and see the bright blue sky, they only remind you of the once beautiful, but ultimately haunting, memories of a twenty year day. And those of us who have visited families, thanked first responders, and hugged many people, it just reminds us of the very human toll that day took on us. I mean, you can talk about the number scale, 3000 lives. Just left an event with firefighters, 343 and over 250 have died since September 11 from related illnesses. The stories go on and on. But we all have to remember, behind every issue there was a person who loved, who was loved and families who are still suffering all these decades later.

It is in their memory that we continue to conduct these honors, these celebrations, if you will, commemorations not celebrations, but commemorations and know that we will continue to do so because they mattered. They were there when people needed them most. Some were innocent victims who just walked to their jobs, but others had literally taken down their uniforms and walked into the unknown in the dark with the smoke and with no regard for their own lives, at their own expense. that they would end up enduring.

This, my friends, is extraordinary and I will always be humbled that there are people there, like our National Guard, who are just, by day, sometimes our neighbors, you see them in the grocery stores. They are our teachers, they are our workers, they are our friends. But when they’re called into service, they put on these uniforms, they get dressed and are ready to do something that I still find so incredibly powerful. The courageous act of being able to stand on the front lines, to do what they are asked to do and to do it for all of us. And it occurs to me that the National Guard was really there on September 11, twenty years ago, when the skies needed protection because the threat came from the air, destruction came from the air and immediately our Air National Guard was deployed and they showed up to protect the skies from those terrorists who used, who armed planes. And I want to thank them.

In my opinion, they never got the recognition they deserved. Twenty years late, but I’m here to clear it up because I saw what you did. And I know what you keep doing. Some of you might have been there at the time, but those of you who also signed up after 9/11, and I think of the thousands of people who answered the call when I was a lot younger, a little girl, when John Kennedy said, don’t ask what your country can do for you, but what you can do for your country. I think that’s also why a lot of you are here today. You felt this compelling need to do something after September 11. You said, I’ll do it. I’m going to sign in. I will be there. And many of you ended up going to places like Afghanistan. I had the opportunity, as a member of Congress, to see many members of the New York National Guard in combat fatigues in an abandoned country. It looked like the lunar landscape as you hovered over the mountains and landed. It was so colorless and over there. I just saw these most amazing individuals, human beings separated thousands of miles from their families and loved ones from their normal lives, but they didn’t think twice. They were there because they knew their country and their state needed them.

Like I said, I will always be in awe of this. But today I am accompanied by a number of elected officials who are also here to honor you. We all recognize that we sleep better at night because you’re ready to show up on 9/11 or show up in places like Afghanistan, or sometimes they show up with me in a sandbar on Lake Ontario and help to stay behind mother nature to protect families and lives. You are always there when we need you.

With me today is my newest lieutenant governor, former senator, lieutenant governor, Brian Benjamin. I want to recognize it here today. I also want to recognize some of our elected representatives here locally. We have Senator Brad Hoylman, Senator Robert Jackson, Assembly Member Richard Gottfried, Assembly Member Peter Abbate is here and I will explain why in a minute, Senator Andrew Gounardes, Senator John Brooks, and also our fantastic Manhattan Borough President Gale Brewer. Let us applaud them for being here today.

But while we can congratulate you, honor you, thank you, make you a beautiful proclamation, ultimately this is also what we can do to make sure that you are rightly recognized and that sometimes means changing the laws to recognize. your service. And I just signed a number of bills and what we did in the first place, in the first bill, and this one is sponsored by Assembly Member Peter Abbate and Senator Andrew Gounardes and I would like to thank them for their leadership on this subject. By broadening the criteria to define the first responders who participated in the World Trade Center rescue in the first place, so there are a number of people excluded, we wanted to make sure everyone was included, and I want to thank them and give them a round of applause for the legislation they supported.

We had a second bill that increased the accessibility of claims for World Trade Center benefits. And this was re-presented by Assembly Member Peter Abbate, who is recognized as a leader on these issues in the Assembly, but also by Senator Diane Savino.

In addition, Bill Three that I signed broadened the definition of first responder to include communications workers. Senator John Brooks, thank you for your leadership on this, as well as Assembly Member Peter Abbate, of whom we were speaking on entering. The Abbate Assembly member and I attend memorials in Albany every year. We commemorate or honor those who gave their lives, whether they are law enforcement or members of the firefighting community, or members of our military. So I want to thank him for that.

We signed these bills to try to alleviate some of the burdens that are in place that make it harder for people to get the benefits they deserve. They really deserve them. And I will just say this, I will continue to support you because you have ours every day. And to make sure that you are not only recognized in word, but also in deed, if there are other areas where we can do more to relieve you, because of the sacrifices you make every day, this is something I guarantee you. My administration will continue to fight for each of you.

So we will stay by your side, you stay by our side. This is the pact we have. This is what we all agree to do when we run for office, we have a pact with our constituents. But what you do when you take on your roles and put on that uniform is far, much, much more courageous, and I want to tell you how grateful we are on behalf of the 20 million New Yorkers who take pride in knowing that you are out there on the front lines defending us and our beloved country.

God bless America. God bless New York State. And I want God to bless the New York State National Guard and keep you in their care. And I also want to recognize General Shields right now, Raymond Shields, who is the leader, what I consider the bravest, tallest, most talented National Guard in the country and I can say it because it ‘is right. I want to call him because I recognize him and let him know that we are also behind you. General Shields, thank you for everything you do. I have literally seen you in combat as you fight with our mother nature or man-made forces. I want to thank you for everything you do, and it’s quite extraordinary.

And once again, let’s applaud the men and women of the New York State National Guard. You get the recognition that has been waiting for you for over 20 years. It’s happening right here, and we’re very proud to do it, and I will present a proclamation to General Shields, who acknowledges it. So thank you very much.