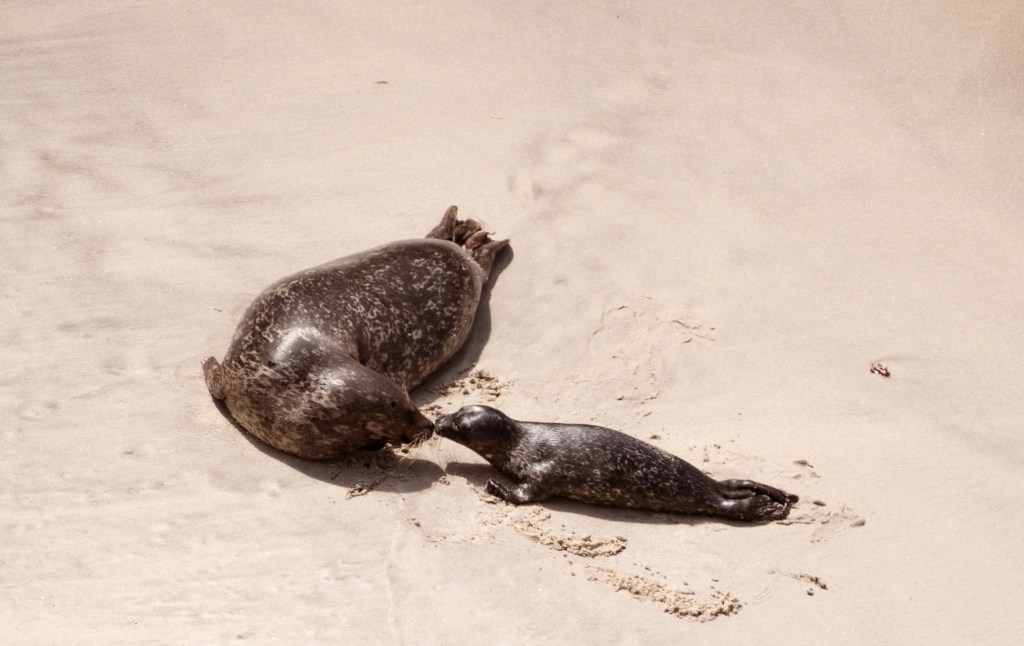 These doe-eyed marine mammals give birth between February and June and are especially sensitive to human disturbance during this time, Akeman says. Birthmothers hang out on the beaches, spending 10 to 12 hours a day ashore nursing the pups and resting.

Loud noises and human encounters stress seals and can push them back into the water, or even cause seal pups to be abandoned. According to the Marine Mammal Center, which rehabilitates and releases harbor seals and other marine mammals, many of the baby seals they care for were abandoned by their mothers after being disturbed by humans.

One day in early April, Akeman counted a total of 42 seals on a beach that had 125 seals on the same day last year. And he says births have also been affected.

Construction began Feb. 14 and stretched between 2nd and 11th streets along Ocean View Boulevard â€“ the same stretch that adjoins critical harbor seal whelping habitat. Crews from California American Water were replacing the aging water main under the road, with the city planning to follow with paving and road improvements before the peak tourist season begins. A notice the company sent to customers in February said work was expected to continue until mid-April.

â€œWe expected to be further away from the harbor seal colony before the pupping season started,â€ says Daniel Gho, director of public works for Pacific Grove.

As roadworks stretched into March, harbor seal monitors became alarmed upon observing the impacts of construction noise on the seals. At the March 2 city council meeting, several community members made impassioned pleas on behalf of the harbor seals, asking that work be halted until the end of the pupping season.

Nursing seals are protected by a local municipal ordinance, which deems the pupping season to run from February to May. All marine mammals are also protected under the federal Marine Mammal Protection Act, which makes disturbing animals a federal offence.

When Councilman Chaps Poduri raised the question of whether the road works would potentially violate these regulations at the March 2 meeting, Gho replied, â€œI don’t know the law on marine mammals and all the violations that would occur. with this projectâ€¦ I don’t. I don’t see how maintaining a road and sewer system would violate a marine mammal law. There is nothing in our policy or codes that says we are not authorized to do this work.

After deliberation, the city council voted 6-1 to go ahead with the planned work with some adjustments to try to minimize disruption to seals, citing timing limitations for funding and the impending summer tourist season. Councilman Luke Colletti was the only dissenting vote.

Thom and Kim Akeman took their concerns to Karen Grimmer, resource protection coordinator at the National Oceanic and Atmospheric Administration, which is responsible for enforcing the marine mammal protection law. Grimmer contacted Gho to remind him of the city’s responsibilities under federal law.

â€œI said that shouldn’t be happening now, and I explained to him all the marine mammal protection law and that there should have been communication with NOAA Fisheries. And that for future projects, we really needed to have more communication,â€ says Grimmer.

Gho has agreed to temporarily halt roadwork projects from April 11 until the calving season is over.

“I thought the actions taken by the city were appropriate,” Grimmer said. “I just wish they had taken these steps a little sooner.”

According to Akeman, the first successful birth of the season at Fifth Street Colony occurred days later.

The Marine Mammal Center has yet to find any anomalies in harbor seal rescues in the Pacific Grove area, which typically peak in May. However, the Center has documented a substantial increase in human disturbance to seal pups and sea lions in Santa Cruz and Monterey County in recent years.

To avoid disturbing the seals in the future, Grimmer emphasizes clear and early communication. â€œWe understand there is a need for maintenanceâ€¦the city needs to do that maintenance and we just want to be able to work with them and come up with a schedule that works for everyone. Including seals.