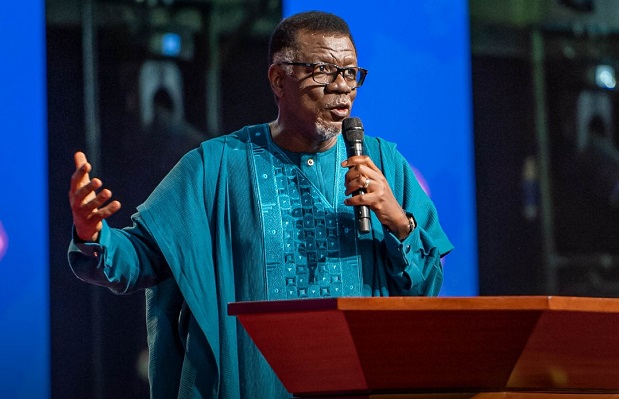 “This is the most important moment for the economic emancipation of Africa and the entrepreneurial empowerment of its young men and women,” said Pastor Mensa Otabil.

Delivering a message titled “It is coming down” at the 2021 Great Works Conference, the pastor and motivational speaker recalled the biblical account of God leading the Israelites through Joshua to defeat the Amorites by raining hailstones throughout protecting Israel.

Pastor Otabil referred to Joshua chapter 10 v 7-14 from where Joshua and his army fought the Amorites to own the land. He described how the passage used anthropomorphism – the use of human language to describe an act of God.

According to him, God routed the Amorites and loudly urged them to break up and destroy their camp. He said the hailstones, although deployed universally, have been cleverly manipulated to protect and give Israel an advantage.

“The COVID-19 adventure is hail that could give Africa an advantage and we must seize the opportunities it presents,” he said.

The well-respected theologian said: “The time has come to motivate Africa to raise captains of industry because a new opportunity has opened up. “

The general overseer of the Central Gospel Church International was speaking on the second day of the annual Great Works Conference.

Pastor Otabil prayed that African leaders seize the opportunity to position the continent to catch up with the rest of the world and close the development gap.

He challenged Africans to avoid a self-destructive mindset, but instead strive to increase wealth.

Pastor Otabil wondered how the African continent appears not to have been invaded by the coronavirus pandemic, as previously expected, compared to other countries with more superior health infrastructure.

He said, after reading copiously the literature that seeks to explain the phenomenon with various theories, his only possible conclusion, albeit unscientific, is that God’s hand of mercy is on a people who seem comparatively to have nothing.

Pastor Mensa Otabil believes God is telling the rest of the world that it is Africa’s season and that it is time for a change.