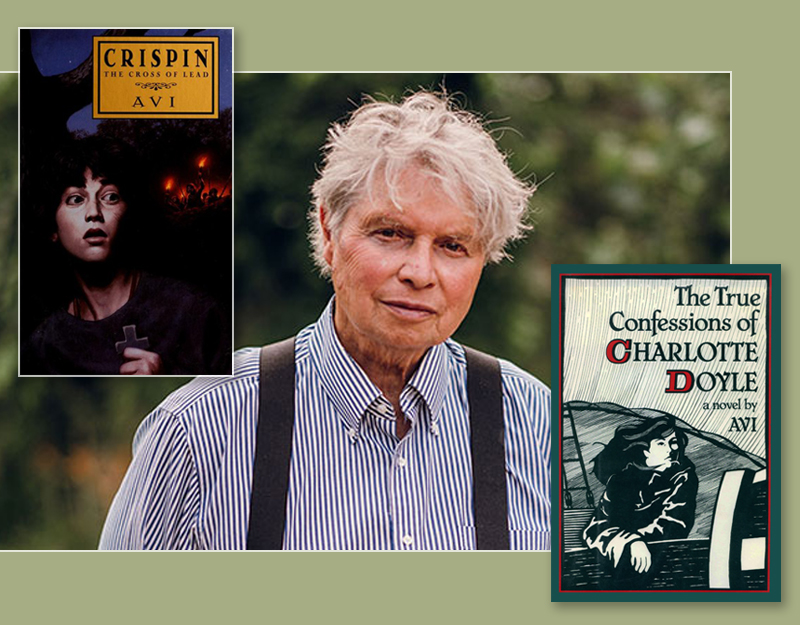 The prolific author of Newbery Medalist Crispin and titles of honor Nothing but the truth and Charlotte Doyle’s True Confessions points out that protest and patriotism are woven into American history.

Avi wrote three books which were recognized by the Newbery committee: Charlotte Doyle’s True Confessions received a Newbery Honor in 1991, Nothing but the truth (both Orchards) received an honorary distinction in 1992, and Crispin: The lead cross (Hyperion) won the medal in 2003. Although the prolific author is best known for his mid-level historical fiction, he has written for a wide range of audiences in different genres, formats and styles. His 81st book, Loyalty (Clarion), will be released in February 2022.

What does Newbery’s legacy mean to you – a medal and two honor books? How have these realizations registered with you in the present moment, and how are they with you now as you reflect on them?

It all came as a big surprise. Such rewards are not so much deserved as gifts. But the price does a number of things: it draws the attention, that is, the readers, to the particular book. All artists, writers included, need to be confirmed to continue working. The prices also have a halo effect, so to speak, on my other work, past and present. I consider my winners to be good books, but not necessarily my best work. (This, I hope, hasn’t been written yet.) In a not-so-great way, such books become the focus of a lot of work. But above all, I am honored that my work has entered a pantheon of beautiful books. Really, we can only say thank you.

Having said that, one of my first thoughts, when I learned of the existence of the Newbery Prize (for Crispin), was, “Oh Lord, the next one better be good.”

The number of honor books varies from year to year and the process is shrouded in secrecy. Some people prefer to spread the wealth; others think it dilutes the prestige of the award. The Newbery committee recognized only one Honor Book in 1991, two in 1992, and five in 2003, so you’ve experienced both ends of the spectrum. Does this debate interest you at all?

I don’t believe there is a “best” or “most distinguished” book that will appeal to all readers. It shouldn’t be either. One of the wonderful things about reading is that each reader decides what is “best.” It’s awesome. I would hate for a reader to feel bad about not liking the “best” book. In fact, I would like the award to go to, say, five excellent books. Better for writers. Better for readers.

Charlotte Doyle’s True Confessions and Crispin: The lead cross are both a historical fiction; you also won the Scott O’Dell Award for The battlefield. People often speculate that the genre is more popular with award boards than with young readers. What is the appeal to young readers and what attracts you, as a writer, to the genre?

I believe that you cannot have a future unless you have a past. Knowing history is knowing that things have changed and can change again. Knowledge of history gives power. The story is a story. I suspect it is not such a popular academic subject because of the way it is taught. Fearing the “dark matter” of our past, our society, like other societies, is often afraid of history. One of the first acts of undemocratic governments is to rewrite history. I think good historical fiction is a great way to teach history.

i would like to call Poppy, which won the Boston Globe-Horn Book Award, and the other six books in the series. I think they are some of your most popular books and you clearly enjoyed writing about these characters. What brought you back to them?

As for the “Poppy” series, this is an example of how sometimes a writer gets lucky and invents characters that he can and loves. These creatures were always fun to write about and relatively easy to find new adventures to frolic in. I was greatly helped by the illustrator, Brian Floca, who illustrated them brilliantly, an added incentive to keep them real in my head and write more of them.

Although it was written over 30 years ago, Nothing but the truth still feels timely and relevant with his exploration of protest, patriotism and misinformation. These same themes also feature prominently in your next book, Loyalty, which takes place during the American Revolution. Can you discuss the new book and maybe preview other books you are working on?

When i wrote Nothing but the truth, my interest was not politics, but the complexity of “truth”. That is, while there may be objective truth, it is extraordinarily difficult to determine. Our jury system is a monument to this reality. That said, protest, patriotism, and misinformation have been part of the American experience from the start. The settlers came to Jamestown in search of gold; when they did not find it, all of these elements came into play. Indeed, the Europeans were extremely poorly informed about the peoples of the Americas. This misinformation always has an impact. Protest, patriotism and disinformation are with us today. Think about January 6, 2021. Samuel Johnston once said, “Patriotism is the last refuge of a scoundrel. The United States has always had its share of scoundrels. Always does. But, hey, scoundrels are fun to write.

All countries have historical myths that help create an origin story. The United States is no exception. The real story is always more complex and, I think, much more interesting. To fully understand the American Revolution, one must also know the fifth of the population that was not free: the enslaved peoples. Also, indentured servants. What role did they play? You should also know that the war of independence was also a savage civil war. Benjamin Franklin’s son was a loyalist. There were a good number of settlers who fought for England. It should be understood that the lofty ideals for which the war was waged – “That all men be created equal” were articulated by a man who enslaved people. It is infinitely complex and, therefore, I think, fascinating and interesting. Fascinating and interesting seems to me to be a good recipe for a novel.

Books to come? There are City of magic, an adventure set in Renaissance Venice, an extension of the “Midnight Magic” books. I am also working on a suite of The secret school. Other projects are underway. Stay tuned. I like to write.

Jonathan Hunt is the Library Multimedia Services Coordinator in the San Diego County Office of Education. He served on the Newbery committee in 2006. Follow him on Twitter @ jhunt24.