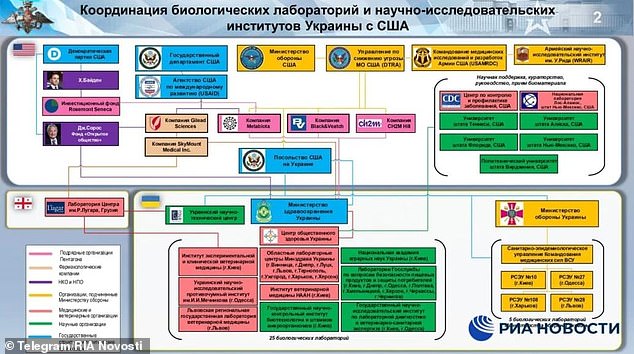 Russia has claimed in a colorful new graphic that Hunter Biden is funding biological labs in Ukraine and that he and Democratic billionaire George Soros are funding anthrax production.

Titled “Coordination of biological laboratories and scientific research centers of Ukraine and the United States”, the diagram claims that they are the masterminds behind what Russian officials describe as “a particularly dangerous anthrax pathogen”. , Russian state news agency Sputnik reported. Russia claimed the information was found in documents seized by their soldiers in Ukraine.

Russia also claimed the US Agency for International Development (AID) was involved in the program, in addition to the Centers for Disease Control and Prevention (CDC), according to the pattern reported by the Daily Beast.

“The scale of the program is impressive,” said Igor Kirillov, head of the Department of Radiological, Chemical and Biological Defense of the Russian Armed Forces.

As part of its propaganda campaign to justify invading Ukraine, Russia’s Defense Ministry on Thursday released a diagram with arrows linking Biden, Soros and the Democratic Party to Ukrainian biolabs.

Russia also claimed that George Soros was involved in the scheme.

“In addition to the military department, the United States Agency for International Development, the George Soros Foundation and the Center for Disease Control and Prevention are directly involved in its implementation. Science curation is done by leading research organizations, including Los Alamos National Laboratory, which is developing nuclear weapons as part of the Manhattan Project,” he said.

They claimed that Rosemont Seneca, the investment firm Hunter founded in 2009, funded the Pentagon’s “military-biological program” in Ukraine. Kirillov claimed that there is a “close connection” between Rosemont Seneca and “major U.S. military contractors,” including suppliers to “Pentagon biological labs around the world.”

Kirillov claimed Biden’s investment fund had at least $2.4 billion in capital. But Hunter himself recently said he needed to take out a loan to pay off his $1 million tax bill.

The Pentagon says it has invested $200 million in Ukraine since 2005 as part of its biological threat reduction program — an offshoot of the Nunn-Lugar program enacted after the end of the Cold War — and is now working on research projects based on about virus-carrying birds and the spread of swine flu.

The program has “enhanced Ukraine’s biological safety, security, and surveillance for human and animal health,” according to the Pentagon, including reducing the risk of the Soviet Union’s biological weapons program.

The relationship began as part of a US effort to lock down unsafe biological materials after the fall of the Soviet Union, working directly with Russia and the former republics. Little is known about the location of the labs, but reports in the past have suggested they were equipped to work with deadly pathogens such as anthrax.

But Russia has used the information to accuse the United States and Ukraine of planning the use of biological weapons — something the Biden administration could signal a planned false flag operation.

China also jumped on the claims and tweeted on March 8: “The United States has 336 labs in 30 countries under its control, including 26 in Ukraine alone.” It should report on its biological military activities at home and abroad and submit to multilateral verification.

But the United States has been open about the labs and on March 11 the World Health Organization (WHO) said it had also advised Ukraine to destroy high-risk pathogens harbored in the labs. the country’s public health laboratories in order to avoid “any potential spill” that would spread the disease among the population.

Conspiracy theories about “biolabs” date back years – with the latest version surfacing just 10 days before the Russian invasion, according to threat intelligence firm Pyrra Technologies. Postings multiplied on the day of the invasion.

“These are all public health and veterinary labs,” said Gregory Koblentz, director of the biodefense graduate program at George Mason University, according to Poynter. “None of them were involved in biological warfare.”

The Pentagon, in its fact sheet, states that it “has worked cooperatively and peacefully with the Ukrainian government to increase biosafety and biosecurity at these sites to ensure pathogens do not pose a risk to the public. Ukrainian or the region”, and says the research has covered topics such as “preparing for and controlling African swine fever”.

Tucker Carlson referenced a report written by a Defense Department director in February warning that US-funded research at Ukrainian biolabs could be exploited by Russian invaders seeking to develop a chemical weapon.

The Russians have been spreading information about the labs for years in what has been called a disinformation campaign, in statements followed by EU versus disinfo

But even Rep. Marjorie Taylor Greene, R-Ga., jumped on the bioweapons conspiracy, giving a floor speech last week claiming that US funding of “biolabs” in Ukraine could “result in deaths” and introduced legislation to “stop taxpayer funding”. for biological weapons.’

“No government should create biological weapons. It is wrong and wrong,” she said.

The Biden administration last week denounced Russian ‘misinformation’ after Russia’s ambassador to the UN claimed the US was backing an effort to use bats and birds to spread weapons biological.

“When we talk about biolabs, we know for a fact that the United States funded the contracts, not only to take over the labs, rebuild them, but also build them. And that comes through grants, by private companies, in the millions and millions of dollars,’ Green said in his speech, which was reported by Mediaite.

“Now what if these biolabs are handling very dangerous pathogens that can lead to the death of people in the regions? There are reports of life-threatening pathogens escaping from these biolabs in places like Ukraine, Georgia, Kazakhstan. It’s responsible for killing people, what if it were true? she asked.

She called them “valid questions.”

“And so, for that reason, because it’s become such an issue and because it bothers so many people I talk to constantly, I’ve introduced a bill to stop taxpayer funding for bioweapons” , she said. “Because no government should create biological weapons,” she said. “That’s bad and wrong.”